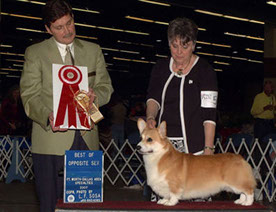 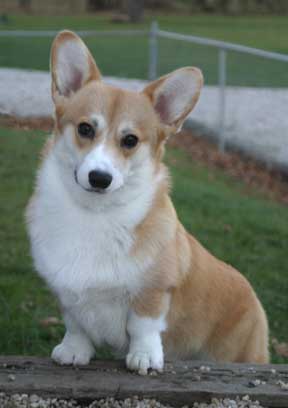 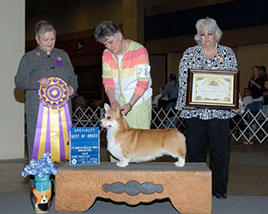 We were so happy to welcome Ethan as a new addition to Springmill Corgis!

Ethan was bred by Dede Rodgers and Mary Greenwood , "Greenwoods Corgis" of Ontario, California and is line bred on their New Zealand imports.

Before he came to stay with us he was RESERVE WINNERS DOG under Judge Andy Carter "Saddlelane" at the Pembroke Welsh Corgi Club of Southern California's Specialty from the 6-9 mo. puppy class. He also won his 6-9 mo. sweeps class at the 2004 Pembroke Welsh Corgi Club of America's National Specialty under Judge Mrs. Patty Gailey, "Triad". He was shown to both of these nice wins by his breeder Dede Rodgers.

Ethan has a great personality and has easily become a big part of our  family! He has an exceptional pedigree combining Champion bloodlines from New Zealand, Australia, England and the United States. We are so excited about showing this young man at the 2005 specialties!

Our first show with Ethan in Dec. of 2004 he received RESERVE WINNERS DOG from the 6 to 9 mo. class under Breeder Judge Larry Adams "Gaylord" at the PWC Club of the Western Reserve's supported entry during the Cleveland Crown Classic shows. Then, despite leaving his coat at home, Ethan received a 4 point major going WINNERS DOG and BEST PUPPY at the Palemtto PWC Club's supported entry of the Hendersonville Kennel Club show in Greenville South Carolina on Saturday February 19, under Breeder Judge Ron Lambert, "Lamin", and he went on to a PUPPY GROUP ONE! Exactly one month later, after deciding it was a bit too cold in Ohio to go without a coat (so he took his coat with him this time), at the Ohio Valley PWC Club's Specialty in Louisville, KY Saturday March 19, Ethan was awarded BEST OF OPPOSITE SEX IN SWEEPSTAKES by Breeder Judge Donna Newton, "Aurora". He also won his regular class under Breeder Judge Peggy Kessler, "Wakefield".

Ethan received a major at the Northern Ky. Kennel Club show going WINNERS DOG, BEST OF WINNERS, and BEST OF OPPOSITE SEX under Judge Mrs. Barbara A. Pessina September 4, 2005.

Ethan finished his Championship by going WINNERS DOG, BEST OF WINNERS, and BEST OF OPPOSITE SEX for two more majors. He  got a 3 point major at the Sandusky Kennel club Nov. 18, 2005 under Judge Kenneth McDermott and a 4 point major under Breeder Judge Sandy Wolfskill, "Elfwish" at the Lima Kennel Club Nov. 19, 2005.

Ethan is such a delight!

Ethan was awarded an AWARD OF MERIT under Judge Mrs. Joan Gibson Reid at the Greater Houston Pembroke Welsh Corgi Specialty in February 2007. We made another trip to Texas,this time for the North Texas PWC Specialty and had a great time at their "Corgi Stampede"... Ethan was awarded BEST OF OPPOSITE SEX to BEST OF BREED under Breeder Judge Mr. Larry Adams, Gaylord. Ethan Tournament of ChampionsEthan wins the PWCCA Tournament of Champions! September 20, 2007!! It was a night of Stars.  All Champions all beautiful! 3 go-rounds and the winner is .... CH. GREENWOODS ETHAN ALLEN! What an exciting evening!

It's back to Texas in March of 2008 and Wow! Ethan thrills us again! He's now BISS CH. GREENWOODS ETHAN ALLEN On March 21, 2008 he was awarded BEST OF BREED at the North Texas PWC Fanciers Specialty under Breeder Judge Peggy Kessler, Wakefield.

It is with a very heavy heart that on November 25, 2013 just 3 months shy of his 10th birthday we had to say goodbye to our VERY special boy, Ethan. We love all our dogs but some just leave a huge hole when they are gone because they have taken up the largest space in your heart. We miss his playful antics. He loved life and lived each day just to love us and play with his toys. We know he will be entertaining everyone up in heaven. It seems so empty and lonely here without him. We miss you sweet boy. Play squeaky ball with the angels till we meet again.

Thank you Dede & Grant Rodgers and Mary Greenwood for sharing him with us. 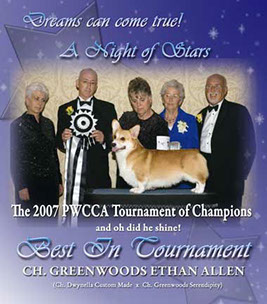 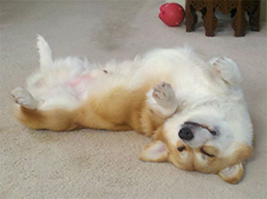 Looking back on the memory of

The dance we shared 'neath the stars alone

For a moment all the world was right

How could I have known that you'd ever say goodbye

But I'd of had to miss the dance

Holding you I held everything

For a moment wasn't I a king

But if I'd only known how the king would fall

But I'd of had to miss the dance

Yes my life is better left to chance 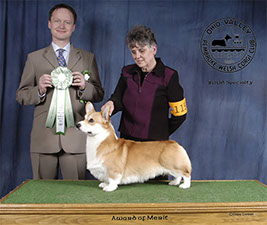 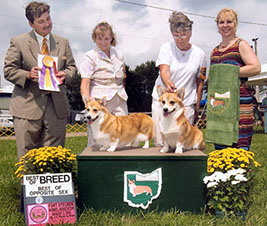 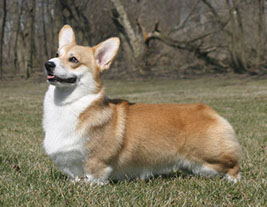 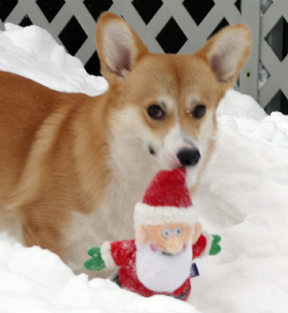 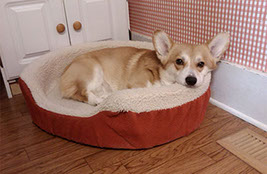 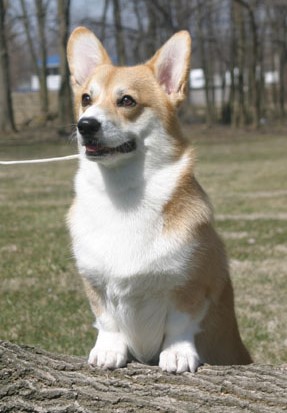