Travis was sired by our English import, Jamie. He finished his Championship at 18 mo. old. All of his points were earned from the Bred by Exhibitor class!

TravisThe day Travis turned 6 mo. old he was BEST OF OPPOSITE SEX IN SWEEPSTAKES at the 2001 Lakeshore Specialty under Breeder Judge Mrs. Cindy Savioli, "Aubrey".  He was again BEST OF OPPOSITE SEX IN SWEEPSTAKES and also RESERVE WINNERS DOG at the 2002 Ohio Valley PWC Specialty under Breeder Judges Ms. Kathy Broska, "Arbor", and Mrs. Anne Bowes,"Heronsway".

Travis finished his Championship November 1, 2002 at the Old Fort Cluster in Fort Wayne Indiana picking up 8 points including two 3 point majors, going WINNERS 3 days with two BEST OF BREEDS and a Group III!

October 9th was a VERY sad day at Springmill Corgis. Our sweet boy Travis, Ch Springmills Go For The Gold crossed the rainbow bridge. he had a stroke the Monday after I got home from the PWCCA National . We thought he had made great strides in a recovery but when we got up this morning I found he had taken a turn for the worse through the night. He died peacefully this morning in "his" crate where he chose to be. 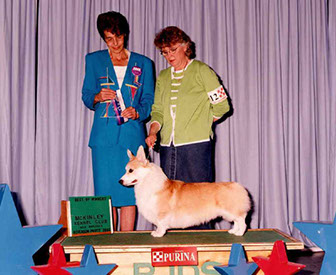